I shared a study previously that showed that post-exercise sauna protocols could increase blood volume and improve performance. This study looked into training in a heat chamber for one hour, five times a week, for five weeks with elite cyclists. The outcome was similar to the previous study finding that:

Heat increased hemoglobin mass (Hbmass)... The greater increase in Hbmass in HEAT did however not manifest in a greater increase in V̇O2max. While HEAT reduced lactate levels during some of the submaximal exercise tests, there were no statistical difference between other performance parameters.

The authors concluded that:

This study demonstrates an increase in Hbmass and small to intermediate effect sizes on exercise variables in elite cyclists following a five‐week heat training intervention.

PRACTICAL TAKE AWAY - heat training can be an effective way to increase blood volume. Some things to consider are:

I really like this study because it contrasts two training prescription methodologies that I like to use and prescribe: block periodisation and heart rate variability guided training. The study compared "the effect of HRV-guided training against BP in road cycling" with well-trained cyclists. One of the particular useful pieces of information in the study is the flowchart that they used for prescribing training via heart rate variability: 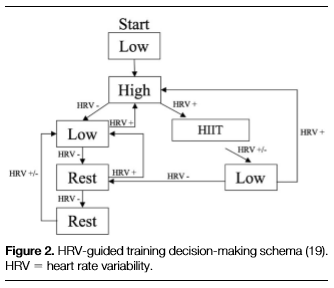 The study found that HRV-guided training lead to better test and performance metrics than block periodisation prescriptions of training. In particular, I found this concept to resonate with me:

It seems that individualizing high-intensity training when the athlete is in optimal cardiac autonomic homeostasis could lead to an improved adaptive response to training.

PRACTICAL TAKE AWAY - training in an optimal state is the most beneficial for performance development and this is more likely to be achieved using an HRV-guided programme rather than a fixed block training plan.

This study is similar to the study listed above in that it compares HRV-guided training to a predefined training plan. In this case the the predefined plan included "two to three moderate- (MOD) and high-intensity training (HIT) sessions per week during an 8-wk intensive training period". Meanwhile the HRV-guided training plan was based on a morning measurement of HRV with "MOD/HIT session...programmed if HRV was within an individually determined smallest worthwhile change".

The number of MOD and HIT sessions was significantly lower in EXP (HRV-guided training) compared with TRAD (predefined training plan). No other differences in training were found between the groups.

While VO2 Max improved in both groups, the 3000m time trial performance was improved the HRV-guided training and not in the traditional training plan.

PRACTICAL TAKE AWAY - using HRV to prescribe training by individualising the timing of high-intensity training is more effective than following a fixed plan.

NUTRITION: Failure of Protein to Improve Time Trial Performance When Added to a Sports Drink

There are a number of sports drinks on the market, especially for ultramarathon or very long endurance activities, that include protein. It would seem to make sense that the longer the duration of an event the more complete and rounded the refueling strategy should be. This study used a test method that is very practical and tangible to avoid the previous issues with testing protein in sports drinks such as the limitations of:

(a) the rate of carbohydrate ingestion was less than what is considered optimal for endurance performance, and (b) the performance test did not mimic the way in which athletes typically compete.

Interestingly, the study found that "adding 2% protein to a 6% carbohydrate drink provided no additional performance benefit during a task that closely simulated the manner in which athletes typically compete".

PRACTICAL TAKE AWAY - there is no need to add protein sports drinks to improve performance.