Gran Trail Courmayeur was one of my goal races for 2019. I have really enjoyed running in Italy and, in particular, in the Val d'Aosta either on training runs or in races like CCC. When I first researched Gran Trail Courmayeur I learned that the race is full of features that I look for in a race, such as beautiful Alpine scenery, a challenging profile and vast and varied trails. There is such a fantastic range of landscapes and terrains to explore and it jumped up on my list of races to do.

In the few months before the race, V and I went to the Val d'Aosta to do some reconnaissance on the route and figure out where the aid stations were. Both of us loved the area and the two weekends we spent in Morgex were relaxing, fun and a great to chance to see some new places. Although it was already summer, there was a lot of snow above 2000m on the route. This made the course reconnaissance a little tricky, as about 50% of the race goes above 2000m. Despite not reaching the top of the big climbs, I managed to see a lot of the route and get a good feeling of what was to come.

In the week leading up to the race I refined my race plan. The goal was to keep it simple: run the best race I could without worrying about other runners, time splits, or placing. I wanted to be sure I wouldn't get caught up spending unnecessary energy early in the race and therefore negatively impacting the second half of the race. I knew my best race would involve running well through the final section without slowing too much and I was focused on being evenly paced throughout the race. V and I put together a thorough nutrition, hydration and aid station plan ready for any race scenario (like the heat wave we had just experienced, or the snow and thunderstorms that impacted the previous year's race). On Saturday morning I was ready to go!

The first section of the race is 33km. It starts in Courmayeur, climbing steeply into the mountains to Rifugio Deffeyes before descending into La Thuile. It is a fantastic introduction to the day of running as there are views of Courmayeur, Pre St Didier and Monte Bianco within the first hour as the runners take on the first climb. The race started at 0700 and I settled in amongst the first 10 runners to make sure I was well positioned as we entered the narrow single track climbing out of Pre St Didier.

This first climb starts in the forest with a steep section requiring power hiking before arriving on a gradual, runnable service road that takes the runners to the first checkpoint at Petosan. I started a little fast on the steep climb, but quickly eased into an even pace to Petosan and then on the climb towards Rifugio Deffeyes. With all the initial climbing, the scenery shifts from forest to above the tree-line where beautiful trails wind along contours into the mountains towards the Rifugio. Although I had trained on the route some weeks earlier, snow stopped me from getting above 2200m so it was completely new trail for me after about 20km. The views were again spectacular as it was possible to see down to La Thuile and the slate-roofed village of La Balme. 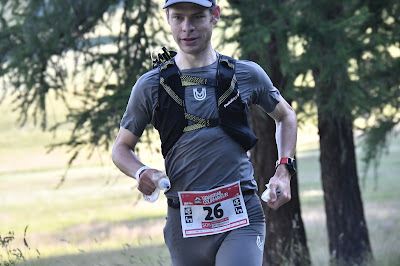 After the Rifugio checkpoint, the race descends past the waterfalls to La Thuile. It is a fast, technical descent with rocky steps and uneven footing. I descended as fast as I could while still looking after my legs in anticipation of the remaining distance. While there were not many runners around, there were many families hiking up to the waterfalls and lakes who courteously stepped off the trail to let the runners through. It was a perfect day for running and great for families hiking so it was a pleasure to see so many people enjoying the valley and its range of landscapes and features.

In Courmayeur I changed shoes, rested a few minutes and made sure to pack my race vest with plenty of nutrition. The upcoming section was the longest of the race: from 33km to 75km, all at high altitude and without any places to see crew along the way. The atmosphere in La Thuile was jovial and supportive with many people watching the race and cheering the runners on. Very quickly we escaped the village and headed upwards again. The climb from La Thuile is long with a gain of more than 1400m from a point at the bottom of the valley to cols at over 2800m. 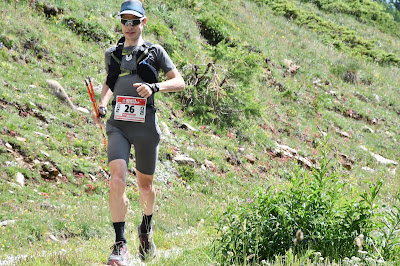 I was running well and I enjoyed the long climb, however, the best part of the race was still to come. Up high there were stunning views and the trails connecting Colle di Youlaz, Mont Nixe, Colle du Berrio Blanc and Mont Fortin were technical ridgeline traverses with sheer drops into deep valleys. The race had helicoptered in an aid station to Mont Fortin which was certainly the highest aid station I've ever seen and welcome relief amongst the stark and challenging landscape.

Descending from those high points was so much fun! It was fast trails and coming down from the high altitude made each step feel easier and faster. At Mont Fortin the runners from the 105km and 55km joined up and shared the trail down to Rifugio Elisabetta. Running past athletes in the other race was encouraging and we all shouted and cheered each other on. From Elisabetta the route follows the trail of UTMB to Maison Vieille. There is a slight difference from Maison Vieille to Courmayeur as the organizers included a cheeky 400m climb up to Courba Dzeleuna. Unlike UTMB where most runners are descending to Courmayeur in the night, we could see the Sports Centre in Dolonne and it felt so close, yet it was a steep, dry and dusty descent away. 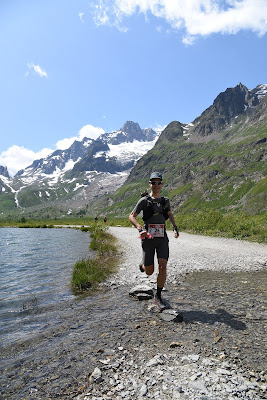 On the descent I was feeling good and pushed the pace a little. I was soon rewarded by catching the runner in front of me and that, along with the knowledge that there were cold drinks, ice spray and food in Dolonne, spurred me on. I arrived at the checkpoint feeling positive and in fifth place.

The last section of the race was another big climb. Runners of the UTMB will know how tough the ascent to Rifugio Bertone and then Bonatti feels after 70km of running - it's not easy! I set a steady pace on the climb as I was determined to run the last section without too much pause or fade. About half way up the climb I caught the fourth-placed runner and moving in front of him motivated me to hold the effort. From Bertone to Bonatti I didn't see anyone. The trails were clear and there weren't even any hikers out doing the TMB route. 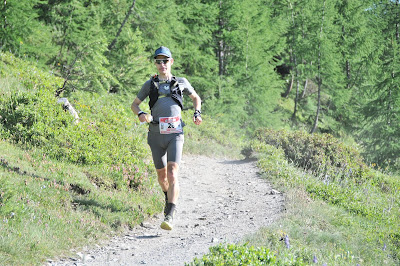 At Bonatti the route leaves the UTMB course and instead of descending to Arnourva, it climbs to Malatra and Col Sapin. I was feeling tired and sore, but above me I could see another two runners who seemed to be going more slowly than me. I maintained my effort holding on to my race-day goal of running my own race and slowing down as little as possible in the latter part of the race. By Col Sapin I had caught the two runners in front of me and knew that all that remained was the descent to the finish.

The last section is the reverse of the CCC course which is very steep before dipping into the forest and then emerging into Courmayeur. By this point I just wanted to get to the finish. I was hoping not to need my headlamp, but in the forest it was too dark to see and even though the loud speaker from the finish was haunting me for the last 5km, it was just too far to go without a headlamp. I ran as fast as my legs and the light would let me and arrived in Courmayeur in second place. 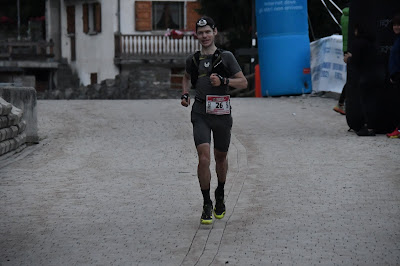 I enjoyed the race tremendously. It was technical, beautiful and familiar all at the same time. I was also pleased to perform on race day and get everything out of myself on the day. I would love to go back and do this race again and would highly recommend it to anyone considering adding it to their calendar. 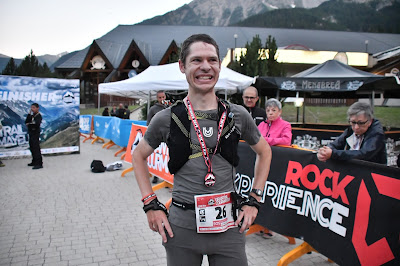