This useful guide provides a phased approach on returning to sport after covid-19. It is a comprehensive guide providing details on different milestones and steps that should be understaken as a patient returns to sport. This flowchart is particularly useful: 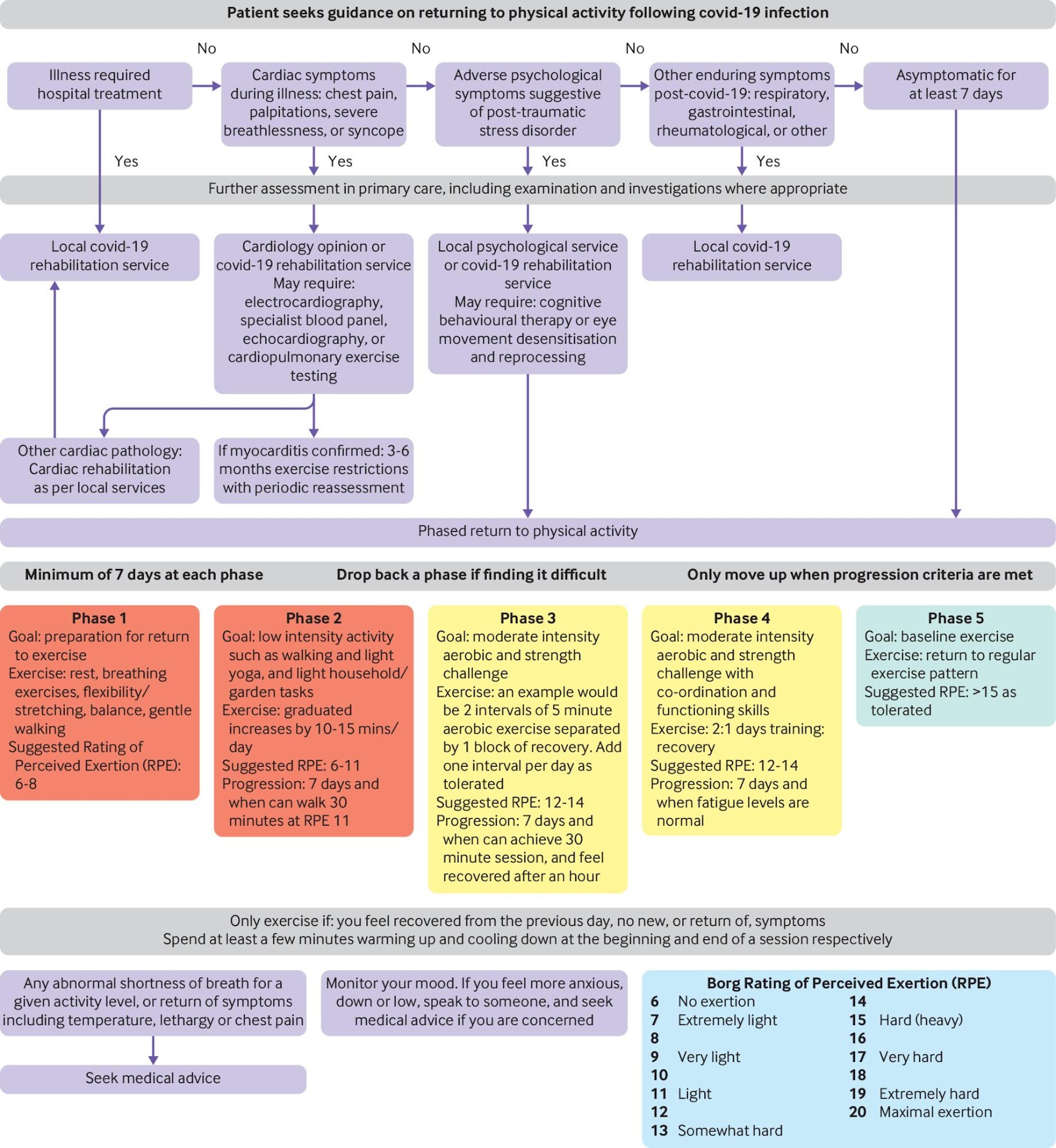 A few key notes I took from the paper:

Only return to exercise after at least seven days free of symptoms, and begin with at least two weeks of minimal exertion

We recommend spending seven days (phase 1) on extremely light intensity activity (RPE 6-8), including flexibility and breathing exercises, for as long as the person feels able to do them, followed by a further seven days (phase 2) incorporating light intensity activity (RPE 6-11) such as walking and light yoga, with graduated increases at 10-15 minutes per day at the same RPE when tolerated.

Progress to more challenging movement activities depending on pre-illness capacity. These might include intervals of two 5-minute blocks of activity such as brisk walking, going up and down stairs, jogging, swimming, or cycling separated by a block of recovery. The person should not feel that the exercise is “hard,” and we would suggest working to an RPE of 12-14 (moderate intensity, not out of breath and could hold a conversation).


PRACTICAL TAKEAWAY - after covid-19 a very cautious and conservative return to sport is recommended.

The SR group had reduced glucose tolerance post-intervention, which was also associated with reductions in mitochondrial respiratory function, a lower rate of SarcPS, and reduced amplitude of diurnal rhythms.

These effects were not observed when incorporating three sessions of HIIE during this period.


PRACTICAL TAKEAWAY - just five days saw a decrease in mitochondrial function and a reduction in glucose tolerance. Therefore try as far as possible to avoid sleep restriction, but if you do have a period of reduced sleep, performing exercise during this period can mitigate the impacts.

I've recently shared two studies on stretching and running economy (here and here). These studies suggested that stretching may not be harmful provided static stretches were held for less than 60". The purpose of this study was to investigate the relationship between running economy (RE) and lower body flexibility.

The author found that:

These results suggest that the least flexible runners are also the most economical. It is possible that stiffer musculotendinous structures reduce the aerobic demand of submaximal running by facilitating a greater elastic energy return during the shortening phase of the stretch-shortening cycle.


PRACTICAL TAKEAWAY - stretching and flexibility may be detrimental to running economy so be cautious of stretching unnecessarily.

The systematic review "analyzed all problems addressed by HRVB and all outcome measures in all studies, whether or not relevant to the studied population, among randomly controlled studies". The authors found that:

HRVB improves symptoms and functioning in many areas, both in the normal and pathological ranges. It appears useful as a complementary treatment.


PRACTICAL TAKEAWAY - HRV biofeedback may be a useful complementary treatment to help with parasympathetic activation.

This study set out to determine the effect of one week of sleep restriction on your men. The protocol followed was:

During waking hours common to both conditions (8 AM-10 PM), testosterone levels were lower after sleep restriction than in the rested condition. The effect of restricted sleep was especially apparent between 2 PM and 10 PM.

Daytime testosterone levels were decreased by 10% to 15% in this small convenience sample of young healthy men who underwent 1 week of sleep restriction to 5 hours per night. By comparison, normal aging is associated with a decrease of testosterone levels by 1% to 2% per year.


PRACTICAL TAKEAWAY - protect your sleep time each night as much as possible as even one week of sleep restriction can have signficant impact on testosterone levels.

Recently I've been researching and testing a means of determining the arobic threshold (AeT) which is considered the first threshold for exercise intensity. In general, it seems easier to measure the second threshold, however, there are still a range of different measurements and tests that can be used to determine this second threshold. "The aim of this study was to determine a critical threshold (CT) interpreted as "the highest exercise intensity where VO2 can be stabilized before reaching 95% of VO2max and compare it with commonly used anaerobic threshold indices".

Work rate corresponding to CT was significantly greater than that of the MLSS, VT, and CP, and CP overestimated both VT and MLSS.

This study indicates that there is a "grey zone" between heavy and severe exercise domain.


PRACTICAL TAKEAWAY - intensity control is important in training prescription, but the means of controlling that intensity are not always simple or consistent. Be aware of the biases and potential errors in a measure you use to control intensity to ensure that you still achieve the desired training intervention.