This is the third installment in a series of reviews of multi-stage backpacks (part 1, part 2, part 4).

After the Atacama Crossing I posted a series of reviews of backpacks to show the best features of certain packs and also to show what options are available for multi-day races. One of the reviews was by Joel about his Salomon XA25 WP backpack. He concluded that he would recommend the pack, but also noted that he would be looking for a smaller pack for his next race.

Joel recently completed the 4Deserts Sahara Race finishing in 7th place overall (his excellent race report available here). He used the Raidlight Evolution 2 for the race and provides his feedback on the pack below.

Joel Meredith and the Raidlight Evolution 2 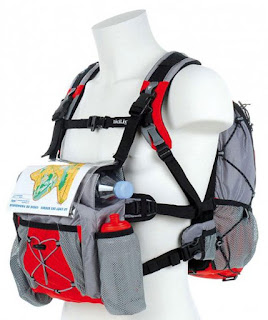 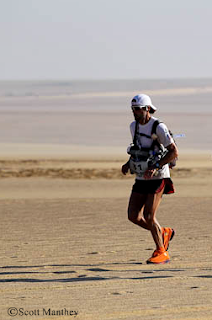 1. What pack did you use during the race?
For the 2012 Sahara Race, I used the Raidlight Evolution 2 Pack with the included front pack.

2. Did the pack have enough capacity for all your gear?
At 24 total liters (20L back/4L front), I had plenty of room to pack all of my gear and still had room to spare. The compression cord system on the Evolution 2 easily shrunk the bag down to reduce any movement of gear within the pack.

3. What was the final weight of your pack and hydration system (without water)
My final pack weight was 6.5kg. I had weighed-in at an even 6kg, but I chose to add some last minute calories.

4. How did the pack fit and ride while you were running?
The pack felt really good. Very secure fit. I trained with a Salomon XA 20 pack, which sits very high, and I chose to move away from the Salomon XA 25 WP, which sat too low on my back. The Raidlight pack sat just right and I had very little movement from either the back or the front portions.

5. What did you use for hydration (front bottle, bladder, etc)
The Raidlight pack has a front pack with a top, insulated sleeve meant to hold water bottles in the horizontal position. I used the 1.5L water bottles provided by the event. It fit perfectly into the sleeve with minimal front pack movement only when the bottle was entirely full (just after each checkpoint). That movement disappeared after drinking ~.5L out of the bottle. I stashed a 1L collapsible Platypus pouch into my front pack to simply make the minimum required capacity. Not only was this a very simple system, but it also proved less time consuming than using front-loading bottles and helped me move seamlessly through checkpoints.

6. Did you use the external pockets on the pack? What for?
I did not use the side pockets on the waistbelt of the pack, since everything I needed fit easily into the large back compartment and the front pack. I did use the small top pocket on the back of the pack to hold my rolled-up camp sandals in order to keep them separate and to reduce the amount of sand getting into the pack.

7. Did anything break on your pack during the race?
The only thing on the pack that even appeared to be worn was a very small section of stitching on the top sleeve of the front pack. This was caused by me repetitively removing/replacing the water bottle. It did not fail or tear, and when I use this pack again I will simply reinforce the seam with some top-stitching of my own.

8. Was there any specific feature that you particularly liked?
I really liked the way this pack fit. It really just hugged my body and became part of me, so I didn’t even notice it. The front pack attaches to the back portion at 6 different and well-spaced points, making any movement minimal up front. I loved the top sleeve to hold my water bottle. This was a huge bonus to have.

9. Was there anything that you would change about the pack?
The only issue I had with this pack, and it’s a minor one, was that the zipper on the front pack seemed to always get caught in the fabric lip that covered the zipper. I was constantly having to pull it out of the zipper while on the run and it did become an annoyance.

10. Would you recommend the pack and would you use it again?
I’m not sure I would recommend any OTHER pack. I plan to use this pack again in next year’s Gobi March and for any future races requiring a large amount of gear. Raidlight seems to be at the top of the pile when it comes to race gear R&D. They get the input of the athletes who are actually using this stuff out in the field and they get exactly what you need into a pack and nothing that you don’t. I like Salomon gear, but there seems to be a disconnect at some point in the engineering/production process. Many of their products either do not function properly or they have systems that do not fit together (i.e. water bottles that don’t fit into their intended holders, mismatched buckle systems). Raidlight has some new packs in the pipeline, but it would be tough for them to beat this one.

Sounds like the perfect pack. I am wanting to buy one for Jungle Marathon. This year I took 40l which was too big to carry comfortably. I would look at sharing the load between front and back - it makes more sense and easy to store items you need during the run without having to take the pack off. Sounds ideal. Thanks for the review.

It is a great pack, although this iteration no longer exists. Raid light have updated the features and produced a similar, but what appears to be a better, pack.

Balancing the weight can make a big difference and is highly recommended.

All the best
Daniel